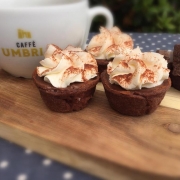 Pure Vanilla is the quintessential neighbourhood cafe. Enjoy your coffee, treats, or lunch inside or out front on the cobbled sidewalk. 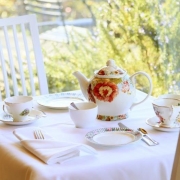 The Teahouse at Abkhazi Garden offers four-star guest service and exceptional food in a beautiful setting, giving guests a memory to cherish.

Seasonal menus showcase regional or Abkhazi Garden-grown produce, complementing the garden’s appearance when it is in bloom.

The Garden that Love Built

Peggy Pemberton-Carter met Prince Nicholas Abkhazi, in Paris in 1922, a prince from a surviving line of kings from the Black Sea region. They found themselves visiting art galleries and conversing in French but were eventually torn apart during World War II.

Peggy met her prince in New York in November 1946, married him and became the Princess Nicholas Abkhazi. They settled in Victoria, where they built their home atop a one-acre property. For over 40 years they cultivated their garden.

In 2000, The Land Conservancy purchased the property to preserve the Garden, the legacy of the Abkhazis. 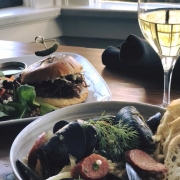 Windsor Cafe is a boutique cafe with a vintage vibe, found in a Tudor style home. Enjoy coffee or wine on the fully licensed garden patio and a seasonally inspired menu constantly being updated. Fresh baked goods in the morning, a bistro-style restaurant in the afternoon till evening. 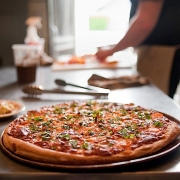 This charming shop is locally owned, and family operated for over 20 years. It’s a coffee shop, gourmet bakery, delicatessen and garden centre all in one.

Demitasse focuses on bringing together a few distinct passions of the owners, which includes: 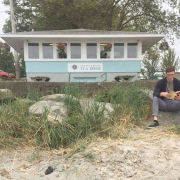 Situated on the beachfront at Willows Beach, you’ll find special care and attention at the Kiwanis Willows Beach Tea Room, operated by Kiwanis Club of Oak Bay. The Willows Tea Room is open from May to September serving hot food, ice cream, drinks, and more to beach-goers.

Volunteers and paid students work together at this quaint little cafe right on the Beach. Proceeds go to support a number of organizations including Kiwanis.

On Sunday mornings between 9:00 am to noon, the Willows Tea Room serves a $10 breakfasts. Choose between:

For information and details about volunteering, visit kiwanisclubofoakbay.com 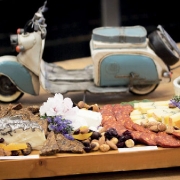 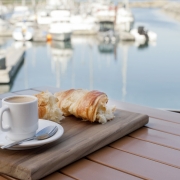 Marina Dockside Eatery is a fully licensed eatery offering spectacular light fare, beer, wine, and cider, and a scenery that will take your breath away.

Overlooking Oak Bay Marina in picturesque Victoria, BC, “Oceanfront casual” describes the atmosphere – where the locals mix with boaters and the cyclists stop to take in the views.

Enjoy daily happy hours right out on the docks and a fresh West Coast menu.

The menu at Dockside Eatery includes white cheddar mac and cheese, chorizo frittata, baguettes and sandwiches, freshly made soups and more. Start your day with locally roasted coffee by Caffé Fantastico, a variety of teas by Silk Road, and freshly baked pastries from our Marina Restaurant Pastry Chef.